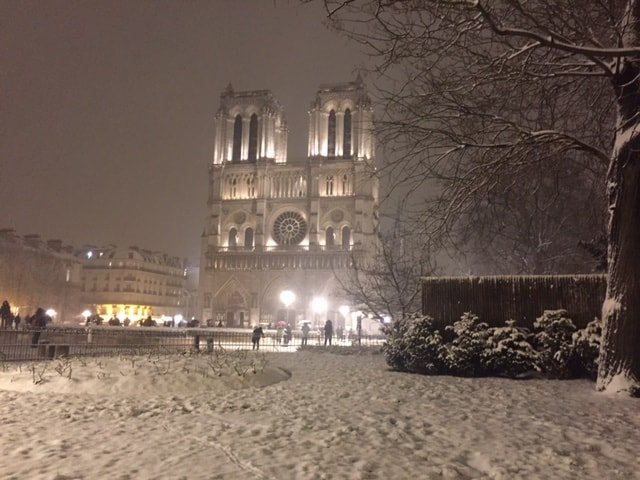 You plan to visit Paris in February?  Find out our tips about Paris weather in February, things to do,  what to pack this month and how to spend a romantic Valentine’s Day in Paris… Welcome !

Many Exhibitions, musicals and Ballet are taking place during this month but February is also the last weeks of winter sales and many celebration will take place for the Chinese new year.

This year, despite the Covid-19 pandemic, restaurants, museums and many attractions will remain open in February.

Weather in Paris in February

Average climate in Paris in Feb.

February is also cold, and there can be snow. You are really in the middle of the winter. The begin and the end of the month are often cold, temperatures can be low (about 0°C -30°F)  during all the month.

But it is romantic to spend Valentine’s day in the City of Light. So Paris weather in February can’t discourage to visit the French capital.

What to pack, what to wear in Paris in February

So during this month it is better to be dressed for the cold. You need to bring with you a winter coat (or parka or jacket), a scarf, gloves. An umbrella might be useful, shoes which support snow too. If you are planning to do shopping, you will not feel the cold.

For example on early February 2018,  Theres was snow and temperatures decreased to -6°C ( 21 °F). It transform Paris in a winter wonderland !

Paris in February : events and exhibitions

Opera, musicals, exhibitions, Chinese new year Celebrations.. Many things to do in Paris in February.

Sales in Paris in February

During the two first weeks of February you still have sales in France, they end Tuesday, on February 1st, 2022 even if the best deals are already done.

You can do shopping in many famous shopping places in Paris like rue Montaigne for “Haute Couture” designers, boulevard Haussmann for great department stores like Le Printemps or Galeries Lafayette, You can also go to rue de Renne, Chatelet disctrict, rue des Abesses in Montmartre district, Champs Elysée Avenue.
You can also discover the fleas at porte de Clignancourt ( Northern Paris).

You can also get good deals in Haute Couture designers outlets stores which can be in Paris or in outlets centers in suburbs. the Greatest is the Vallée Village Center where you can find Sandro, Maje, Givenchy, Lacoste … near Eurodisney

Have a romantic Valentine’s Day in Paris

You are in Paris on February 14th and you are looking for ideas to spend a romantic Valentine’s Day in the City of Light have look on Romantic things to do in Paris and our selection of romantic restaurants in the French Capital.

Read our guide about Valentine’s Day in Paris.

>> Find a romantic Hotel in Paris.

Hotels will be open in February.

The Chinese new year, named year of the Rat, begins on the February, 1st 2022. Celebrations in Paris occur the two first weekends of February.

The parade of 3rd and 4th arrondissements of Paris is certainly the most spectacular and the most inevitable of all.During the parade, organized on the occasion of Chinese New Year, many Dragons and Lions will be dancing and many costumes will amaze you. February 5th or 6th 2022(to be confirmed). start at 2h30 pm at Hotel de Ville (City Hall) end at

February,1st 2022 – The parade starts at Mo Belleville (known to be a Chinese district in Paris) and ends at rue Beaubourg

The 13th arrondissement of Paris offers each year the most legendary parade in the most famous Chine district in Paris. Onlookers that day are numerous and even if it is sometimes hard to carve out a place to watch the spectacle, the atmosphere amazing.

February,1st 2022 (to be confirmed)- Start at 1 pm at 44th avenue de la porte d’Ivry then avenue de Choisy, place d’Italie, tolbiac and the back to the avenue d’Ivry.

During this period, many open-air ice skating rinks are available to enjoy winter activities with friends or family outdoor activities
-on the square in front of the Paris City Hall (Hôtel de Ville)
the 1,365-square-metre rink with an area for children and beginners. Instructors and trainer  will also teach you how to skate .  Free entry, €5 for skate rental – Place de l’Hôtel de Ville 75004 Paris

Watch the super bowl in Paris.

Many Bars and Restaurants in Paris organize special Parties for the Super Bowl. Find a selection of places to watch the Super Bowl here

On Sunday  February,9th will be the 10th Sunday’s Screening edition , video art event in the Marais district Art galleries from 2pm  to 7pm.

The Screening Sunday’s were created in 2010 by Polaris gallery to reserve three Sunday afternoons a year in video art.
So every edition, fifteen galleries gather for you to discover pearls of video art.

Art Exhibitions in Paris in February

Many Art Exhibits in Paris in February:

Paris in January. Weather, what to wear, events, winter sales

Paris in April. Weather, what to wear, What to Do

Paris in October: Weather, What to Wear, and...

December in Paris: Weather and What to Do...

Paris in November: weather, events, tips and what...

Many art exhibits will take place in Paris in Feb 2015 like Niki de St Phalle retrospective at Grand Palais or Jeff Koons at Centre Pompidou . Enjoy !

What are forecasts for february 2016? Will the winter be cold this year?

Do you encourange me to pack boots for snow for by next month’s trip ?
I’ll stay 5 days in Paris and I want to visit many things

Snow boots aren’t necessary this year! Temperatures are still between 40 to 50 degrees F but do pack an umbrella!

It snows today but not heavily . It melts quickly