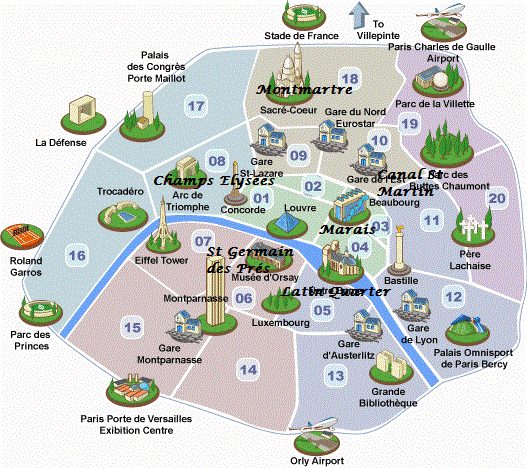 Set foot on a new street in Paris, and you’re already in another world. Each Parisian neighborhood has its own unique atmosphere which is different from the rest. From the artistic Montmartre to the student-friendly Latin quarter, through the gentrified Saint Germain des Près neighborhood and the very hip Marais district, each one has its own restaurants, shopping areas, and attractions.

A Map of the Paris Neighborhoods with districts

Paris districts, or arrondissements in French, are 20 in number. As represented in this map, the first district is in the center of the town ( the Island of la Cité and the Louvre) and the 20th is at the east of the city. In one arrondissement, you can have one or many Neighborhood.

Montmartre is situated on a hill in the North of the city. You can either reach the top by cable car or by climbing a flight of 222 steps.

Montmartre was originally a village, and you can still find this village ambiance in the Abbesses quarter with its narrow steps and crooked streets lit by old street lamps.

During the 19th and early 20th century, Montmartre welcomed many famous painters like Pissarro, Toulouse-Lautrec, Van Gogh, Modigliani, and Picasso. Upon reaching the top of the hill, be sure not to miss the Sacre-Coeur where you can take in the breathtaking panoramic view over the rooftops of Paris.

Located on the right bank of the Seine river, the Marais neighborhood is one of the most famous quarters in Paris.

Read also: our selection of best hotels in Paris.

Although it is a very old area, it is regarded as a trendy district with many fashionable shops and a rich nightlife. Many tourists like to wander its narrow streets and enjoy shopping in its trendy shops. In the Marais district, you will come across many art galleries and Concept stores, as well as famous museums like Musée Picasso, Carnavalet and the Centre Pompidou.

It is also known to be as one of the most cosmopolitan areas in Europe.

Read more about The Marais

The Latin Quarter (Quartier Latin in French) is a neighborhood located in the 5th arrondissement of Paris, in close proximity to the Sorbonne University. Its name is due to the fact that the students and teachers who used to gather at this place used to speak Latin until the French Revolution. Many attractions can be found in this area, such as The Pantheon, The Musée Cluny (The National Museum of the Middle-Ages), and The Arab World Institute.

This is a very captivating and historic district known for hosting the French aristocracy, in addition to several private mansions. Described sometimes as the “American district of Paris“, the Saint-Germain-des-Prés neighborhood has always been an especially charming area, where the mystery never ceases to amaze and inspire many authors and artists including Samuel Beckett, Brel, and Duke Ellington.

>>Find a selection of best hotels in Paris

With a length of almost 1.5 miles running from the Arc de Triomphe to Place de la Concorde, the Champs Elysees compose the most beautiful street in Paris.

In addition to being one of the most famous avenues in the world, it is also a neighborhood with many shops, gourmet restaurants and a rich nightlife.

From the immense Louvre Museum , you can walk in literally any direction and come across some well-known sights including the Louvre,  la Place Vendome, and the Jardin des Tuileries park. You can find your way to other famous museums in the area. For example, the Musée de l’Orangerie and le Jeu de Paume (Photography museum) are very close.

The Louvre area has long been a chic residential area for the wealthy, however it is bustling with many shopping streets like rue Saint-Honoré and rue Etienne Marcel.

The vast pedestrian zone between the Centre Pompidou and the Forum des Halles attracts a lot of people. Just as it was for the 850-or-so years during which the area served as Paris’ main marketplace. There are numerous shops and places to eat . They stay open during the evenings, that draws Parisians out for a night on the town. Les Halles is known to be a shopping area that attracts many young fashion victims. You can now find in the Neighborhood, the Collection Pinault at the Bourse du Commerce, one of the greatest contemporary art collection in the world.

Around the time of WWI, writers, poets and artists of the avant-garde movement abandoned Montmartre. They crossed the Seine, shifting the center of Paris’ artistic fever to the area around blvd du Montparnasse .

Chagall, Modigliani, Miro, Picasso, Hemingway, and Cocteau as well as political exiles such as Lenin and Trotsky, all used to hang out here. They use to talk endlessly in the cafés and restaurants for which the quarter is still famous.

Although the trendy Latin Quarter crowd considers the area hopelessly characterless, Blvd du Montparnasse and its many fashionable restaurants, cafés and cinemas attract Parisians in large numbers in the evenings. Rue d’Odessa and rue de Montparnasse are famous for their creperies . Montparnasse is considered as the Breton district of Paris.

Paris’ most prominent landmark, the Eiffel Tower is surrounded by open areas on both banks of the Seine. Nearby, parts of each of the banks are ornamented with several outstanding museums. You can visit the Quai Branly Museum and the Musée d’art moderne de la ville de Paris. In this area, you can also find the Champs de Mars garden, the Palais de Chaillot, and Trocadero . As well, many famous bridges such as the Alexandre III and Alma bridges make this Area famous .

It’s your first time in Paris? Read our guide to visit Paris in three days.

The site of the first settlement around the 3rd century BC and later the center of the Roman town of Lutece, the Ile de Cité (City Island) remained the center of royal and ecclesiastical power even after the city spread to both banks of the Seine during the Middle Ages.  The Ile de la Cité is well endowed with great spots for a picnic. Many famous sights such as Notre Dame, the Sainte Chapelle, the Conciergerie and the flower market attract tourists and Parisians.

This well-kept secret (although its 4.5 km long), the Saint Martin Canal represents one of Paris’ hidden delights. Its two paths are wonderful for a romantic stroll or bike ride past nine locks metal bridges.

Parts of the waterway are higher than the surrounding land. Nowadays , Canal Saint Martin is known to be a trendy quarter with many contemporary clothing and jewelry shops, art galleries and very pleasant cafés. There are certainly among the best places in Paris to brunch.

Don’t miss out on the trendy the festive République and Bastille neighborhoods and the famous Père Lachaise Cemetery.

What is the most Romantic Neighborhood in Paris?

The most romantic neighborhood is certainly Montmartre with its typical narrow streets and wonderful view on Paris. The Cité or Saint Louis Islands can also be a good option

What is the best area for food?

In each Neighborhood , you can have good restaurant: Montmartre, Latin Quarter, Saint Germain de Près. Just avoid too touristy places like the Champs Elysées, around Saint Michel or place du Tertre. You can find very good resataurants at a reasonable price in areas where Parisian live like Batignolles (17h), République (10h & 11th) or Lamarck-coulaincourt (in Montmartre)

Which Neighborhood to visit in Paris?

The more typical neighborhoods in Paris are Montmartre and the Marais. You can find there a rich night life and very good restaurants. You can also visit the island of la Cité and the palais Royal area

What is the best quarter for nightlife?
We are 3 friends and we want to get out in paris

To get out you have the choice in Paris.
The Marais is known or its hip parties, The Champs Area Area for chic parties (there are many night clubs).
Nights are also very animated in the Grand Boulevard area. There are many pubs, and night clubs.
Montmarte and Pigalle area is also a good place to get out but it’s best to prepare in advance to avoid bad surprises

What is the best neighborhood where to stay which is affordable and closed to Central Paris?