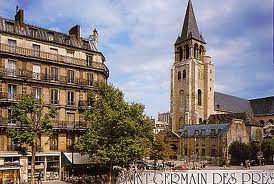 Follow our Itinerary and discover best things to do and see in Paris the  Saint-Germain-des-Près neighborhood and its special aura.

The quarter has become during the twentieth century one of the most sought intellectual and artistic life centers in the city, and by extension a very trendy area (this is where the accommodations are more expensive).

Literature, poetry, Be Bop and Jazz perfumed all the lifestyle in the area.

Many writers, thinkers and other artists have made its cafés and cabarets the seat of their creative exchange .
The 17th century quaint buildings welcomed publishers, bookstores, music shops and antiques stores.

Today, clothes took the ascendancy over books. Indeed, today, the district is more facing haute-couture or fashion design than  paper or writing.

But recently, many art galleries, contemporary art especially, seem to resettle windows on  Seine and Mazarin streets and to restart the Parisian left bank artistic breath. 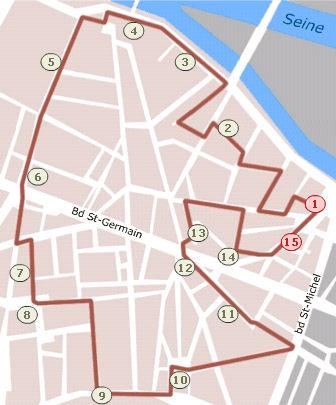 A walk in Saint-Germain-des-Près

Find a full described walk in Saint-Germain des Prés neighborhood and discover best attractions in this magic area of the City of Light From Saint Michel square to Hautefeuille street and via the famous rue des canettes street.

Place Saint -Michel is one of the hearts of Paris . When you stand near its banks , it offers a beautiful view to the east of Notre Dame, opposite the Palace of Justice and to the west of the Louvre . In its center, you will find the Saint-Michel fountain that can refresh you a bit in the summer. It is also one of the most popular points of  meeting for  Parisians before having a drink in the neighborhood.

Head to the west side of the square. Somewhat hidden behind a newspaper stand , you find a gap in the buildings : the rue de l’ Hirondelle street . 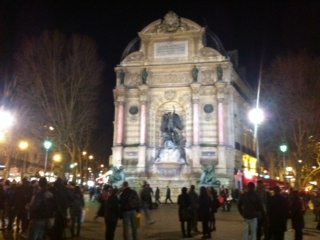 You come suddenly in the very old Paris : buildings which are its streets are generally from  18th and sometimes the 17th century. Street names bear the heritage of centuries of history.

Almost at the corner of rue de l’ Hirondelle ( engraved ” Irondelle ” ) and rue Git the Heart , a bathroom weapon welcomes you and invites you to dream time duels , although only dates ( that ) of 1888. the name of the rue Git-le- Coeur suggests that strong romantic legend is attached to it. The reality is more prosaic : it is a deformation of the Gilles-le-Queux (Queux meaning ” cook ” in old French  ) .

Take on your left rue Git -le- Heart , then turn right into rue Saint André des Arts and then right again into the street Seguier . Then take the street on your left and right of Savoy the rue des Grands Augustins then immediately left into Rue du Pont de Lodi then left the Rue Dauphine , right street Nesle . In the middle of the Museum of Letters and Manuscripts . At the end , take the old Nevers street on your right : you emerge on the Seine.

Follow the quays in the direction of the car , you follow soon the facade of l’Hotel des monnaies (the Mint) .

The Mint was built by architect Antoine  in 1771. The building , seen from the dock, has a long frontage of 120 meters and two floors above a ground floor . It used manufacture currency and medals until 1973. Today it is a museum.

Continue walking on the Quai de Conti , enjoy the beautiful sight on the Louvre museum and suddenly you are in front of the Institut de France, in which is the famous French Academy .

The  Institute de France Palace owes its existence to Mazarin ( 1602-1661 ) . Indeed, he asked by a will to build a college of four nations which became in 1775 the Institute of France . The building and its famous dome are  installed on the location of the Tour de Nesle.

Continue for a few more meters on the banks and turn then left to arrive into Rue Bonaparte street . You will follow a large building on the right side : it is the  (L’école des Beaux-Arts)National School of Fine Arts .

The School of Fine Arts is a wide buildins it spreads  over two hectares, between rue Bonaparte street and the Malaquais dock in the heart of Saint-Germain quarter. Its oldest part is the chapel, built at the beginning of the 17th century . It is here where the first French museum was installed during the period of the Revolution and the Empire. The school is open to visitors . Its gardens contain many admirable statues.

Continue Bonaparte street : just before crossing the boulevard Saint- Germain , you will discover the old Saint- Germain -des- Prés church that has given its name to the neighborhood. 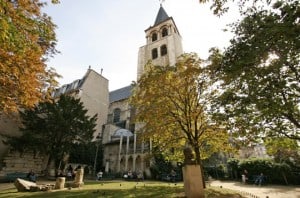 This old and high church and that we can see today is only a remnant of the great abbey which it used to be in the past. It was badly damaged during the Revolution, and they were obliged to complete the dismantling during the 19th century .

A project of extension of the rue de Rennes street leaded by Baron Hausman also failed to completely destruct it. Do not forget to stop in the small square which is attached : you will see scattered a chapel built in 1225 by Pierre de Montreuil elements.

Always in the Bonaparte street , cross the Saint- Germain boulevard, turn left into the rue du Four then immediately right : this is the la rue des canettes (cans streets).

>>Best place to rest with many  famous Brasserie and cafés : the famous Café de Flore, where Vian, Sartre, de Beauvoir, Camus, Duras, Cocteau, Prévert and many others were  often seated. A meeting point of the “artistic pool” for decades,  just sip coffee in memory of those old spirits. Try also the Deux Magots and Brasserie Lipp,

Canettes street is well known by Parisian students for more than four centuries ( and perhaps more since it is proven that this street exists since 1260 ) : here we find most of small bars and cafés for young people .

>>If you are thirsty try this bar: Chez George , it is very famous

Continue to the end of the street and you are already on Saint- Sulpice steps .

It is in 1643 that it was decided to build the St. Sulpice church. Queen Anne of Austria herself laid the first stone. Its construction was however interrupted due to funding issues from 1678 to 1718. His great portal was not completed until 1749.  Neglected by tourists during a long time, the church is now experiencing a revival through the publication of The Da Vinci Code.

Take the Saint- Sulpice street( located on the north side of the building ) to the Garancière street and go back to the end. You are in front of the Palais du Luxembourg.

Salomon de Brosse was commissioned by Marie of Medici to build a palace instead of the former Hôtel des Luxembourg. The Palace was inhabited only in 1624. The Queen not stay there long time, because after a dispute with Richelieu , she had to go into exile in 1631. After the Revolution and some architectural modifications , the Palace became the meeting place for  Senators . Today the monument can be visited once a month but its gardens are open every day.

Walk along the front of the Senate up the rue de Vaugirard  street ( the longest street in Paris ) and turn left into rue Rotrou street . At the end, you’re on the Odeon Square.

Inaugurated in 1782 , the Odeon theater , with its  neo-classical style is architectural model of the French Enlightenment century. It was originally built to house the French Theater instead of the hotel gardens Condé by order of Louis XVI . Most recently, he was one of the high place of the student revolt during May 68 .

Engage in Racine Street to the west of the square and at its end , turn immediately left and engage in the rue de l’Ecole de Medecine street  .

Walking down the Ecole de Medecine Street , you walk on an ancient Gallo- Roman path between two vineyards. On its left-hand side in the downhill, you will see a large plaque in honor of Sarah Bernhardt a portal to the Couvent des Cordeliers

Continuing down the de l’Ecole de Medecine street , you arrive at the Carrefour de l’Odéon ( not to be confused with the place de l’Odéon ) .

This crossroads is well known by Parisians  : Everyone knows where is located the Danton statue whose base is very often a meeting venue before going  to one of the half- dozen theaters located in the area. However many of them ignore that this status rises exactly in the  place where there was the house inhabited by Dantonduring the French  Revolution.

On the other side of the Saint- Germain boulevard, you can  see a gap in the buildings.  It is the Saint -André commerce court

This passage was opened in 1735. Originally, it was twice as large , but the opening of the Boulevard Saint- Germain reduced it . Inside , do not miss the Cafe Procope which is one of the most famous cafes in the world. If have served as a place of rendezvous for the actors of the French comedy when it was in the area . And it was a meeting place for French revolutionaries. This is where the attacks against Tuileries were launched on June 20th and August 10th 1792 .

In the middle of this passage, on its right side there is a discrete gate which seems inaccessible. It  leads you into a fabulously exotic environment : it is the courtyard of the Hôtel de Rohan.

This place  is in fact the Bishops of Rouen Hotel. Three small successive squares are one of the best preserved Renaissance and medieval atmosphere  Paris .  You leave this magical place by the  rue de Jardinet street .

Take the rue du Jardinet  street  , continue across the street from the very old rue serpente Street then take the Hautefeuille street on your left . You will certainly see a turret.

Even today, we do not know exactly the  origin of the name of this street. It is sometimes said that is about a Castle Hautefeuille . But it also said that it evokes a temple, named ” Altium floium ” , and dating from the Roman occupation  . These indications make this street one of the oldest in Paris . At No. 5 , we discover an extraordinary turret overlooking the street . It is the most important trace of the Hôtel des Abbées Fécamp (Fécamp Abbey Hotel )built in 1292 and then rebuilt at the renaissance.

Saint Germains des Près was the second country of Jazz music. Be-bop was created in this district

Each May Jazz festival take place in the quarter.

The festival will also pay tribute to Duke Ellington on  Tuesday, May 20 at St. Sulpice Chruch with a great concert of Duke Ellington, gospel and sacred music.