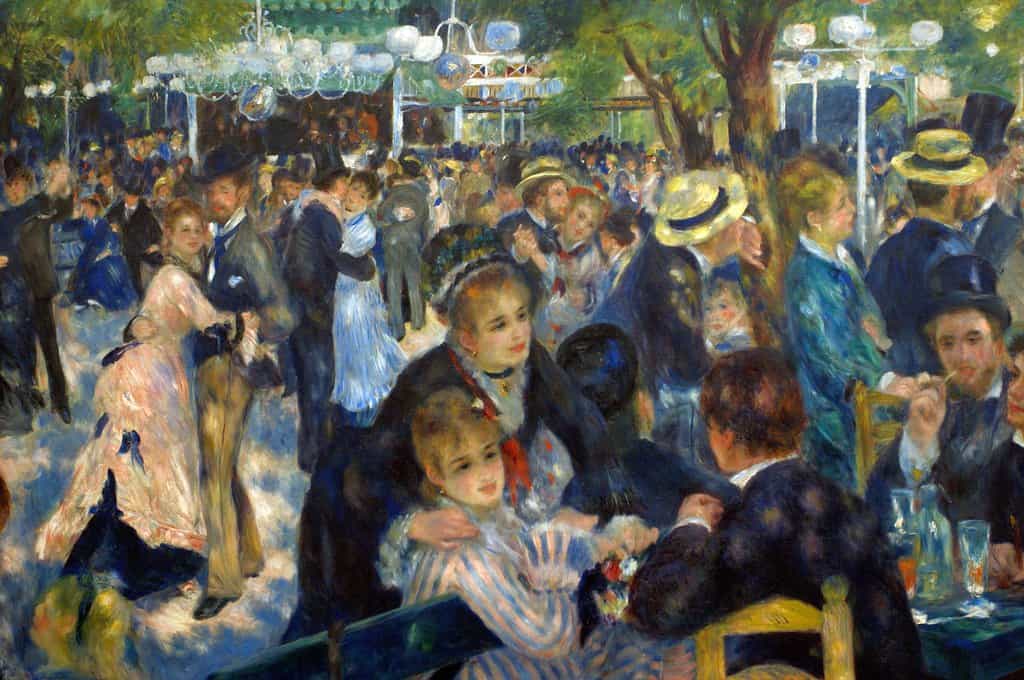 Montmartre boasts a great number of attractions which people from all over the world, as well as Parisian locals, come to enjoy. Once you get off the beaten track, Montmartre has some charming corners for walkers and the curious to explore; houses showing their age with crumbling walls covered in ivy, paths and wild gardens which are often lined with cherry trees and steep staircases which are incredibly charming – but watch your step!

Here is a compilation of 20 fantastic places to visit in Montmartre.

Monuments and Museums to Visit in Montmartre Paris

You can hardly miss the enormous building which has pride of place on la Butte. This basilica is the result of a “national vow” made by the Catholic Church to expiate the crimes of the Paris Commune.

Paul Abadie, who was the most conservative and pompous of architects of the time, chose a Byzantine style. The construction work lasted from 1875 to 1914. At its inauguration at the end of the 19th century, Willette, a famous local painter, went along with his friends to yell “long live the Devil!”. Emile Zola considered the Sacré-Coeur a chalky mass, overwhelming and dominating the Paris which gave us the revolution.

It’s worth going up the 237 steep, narrow steps into the cupola to take in the wonderful panoramic view over the lovely gardens usually hidden by high walls, the old cemetery and the fine chevet of St-Pierre.

Half a block West of the Saint Pierre de Montmartre Church, parts of which date from the 12th century as it’s the only building left from the great Benedictine abbey of Montmartre, is Place du Tertre, once the main square of Montmartre.

These days, cafés, restaurants, and portrait artists are at the heart of the square’s liveliness. Be sure to keep an eye out for the two windmills to the west of rue Lepic.

Over 300 works by Salvador Dali (1904-89), the Catalan surrealist print-maker, painter, sculptor and self-promoter, are on display at this museum at 11 rue Poulbot – just around the corner from Place du Tertre. It is open daily from 10am to 6pm.

Established in 1789, the Montmartre Cemetery, is the most famous cemetery in Paris after Père Lachaise. It contains the graves of such people as the writers Emile Zola, Alexandre Dumas the younger, Stendhal and Heinrich Heine, as well as composers Jacques Offenbach and Hector Berlioz, the painter Edgar Degas, the film-maker François Truffaut and the dancer Vaslav Nijinsky.

The entrance nearest the Butte Montmartre is at 20 Ave Rachel, down the steps from 10 rue Caulaincourt.

On Montmartre hill on the corner of rue Girardon and rue Lepic, the last survivor of the great windmills, stands the Moulin de la Galette, built in 1640.

At the end of 19th century it became the setting for a famous popular dance hall immortalized by Renoir.

Toulouse-Lautrec used to come here to drink bowl of hot wine flavored with cinnamon and chat with the local ne’er do wells.

The museum of Montmartre at 12 rue Cortot displays paintings, lithographs and documents relating to the area’s politically rebellious and bohemian past. It’s hard to appreciate what the big deal is unless you know something about Montmartre’s mythology.

After your visit, wander into Renoir’s lush wild Gardens which are found at the back of the museum.

On the corner of rue Saint-Vincent and rue des Saules, there’s a small Gamay vineyard whose annual production – several hundred bottles of Clos-Montmartre – is auctioned off in aid of a charity which cares for the elderly residents of Montmartre.

The last vine on la Butte runs down the hill from here. For many years they covered it entirely and produced a wine known as ‘Picolo’. During the first fortnight of October (usually the first Sunday), they have a party to celebrate the grape harvest.

The Museum of Naive Art, founded in 1986, is situated in Halle Saint Pierre at 2 rue Ronsard, across from square Willette and the base of the funicular. The colorful, vivid paintings from around the world are immediately appealing, thanks in part to their whimsical and generally optimistic perspective on life.

The museum, whose exhibitions change frequently, is open daily from 10am to 6pm.

The gallery on the ground floor hosts temporary exhibitions and you can enjoy some refreshments in the café.

The real attractions of Montmartre, apart from the spectacular views (best enjoyed when there’s not too much haze), are the area’s charming little parks and steep, winding cobblestone streets.

Take a stroll down the rue de l’Abreuvoir, between a row of flower-covered village houses and a wild park. In the great curve and depression formed by the end of the street you can spot the former water trough for horses. N° 22 is the house of the poet Aristide Bruant.

The allée des Brouillards is very narrow, with steps, a stone balustrade and houses groaning under the weight of the ivy which covers them. Behind the high walls there are many secret gardens, and the area is still quite charming.

Renoir occupied a house at N°8 in the allée for a while. In march 1997 the little square located on the corner of rue Girardon and allée des Brouillards changed its name to ‘place Dalida’ and erected a bust to commemorate the popular French singer.

In a couple of strides you’ll reach square Suzanne-Buisson. Art-deco style, terraced and very romantic in the evenings by the light of street lamps, it is lined with a few houses and has a fountain in the middle.

The rue Saint Vincent is one of the most picturesque streets in Montmartre, and has inspired poets such as Aristide Bruant.

The modest St-Vincent Cemetery where the painter, Utrillo, and the writer Marcel Aymé are buried, borders it on one side.

On the other side is a walkway with an iron handrail.

Read more about picturesque places to visit in Paris

Place Emile Goudeau and the Bateau-Lavoir

The Place Emile Goudeau is one of the most charming squares in Montmartre. At n°13 stand the famous Bateau-Lavoir, a former meeting place of so many artists.

One of the first tenants was Pablo Picasso. It is said that his studio was a real mess and never changed.

Rich and happy at the end of his life, he continued to refer to ‘my sort of rubbish bin’ when talking about this sumptuous villa.

It was at Bateau-Lavoir that Picasso painted the famous Demoiselles d’Avignon who were  neither demoiselles (single young ladies), nor from Avignon. Other artists who frequented the building were Kees Van Dongen, Max Jacob and Amedeo Modigliani .

>>Find our selection of Hotels in Montmartre there

Top Places to visit in Paris: 10 iconic and picturesque squares