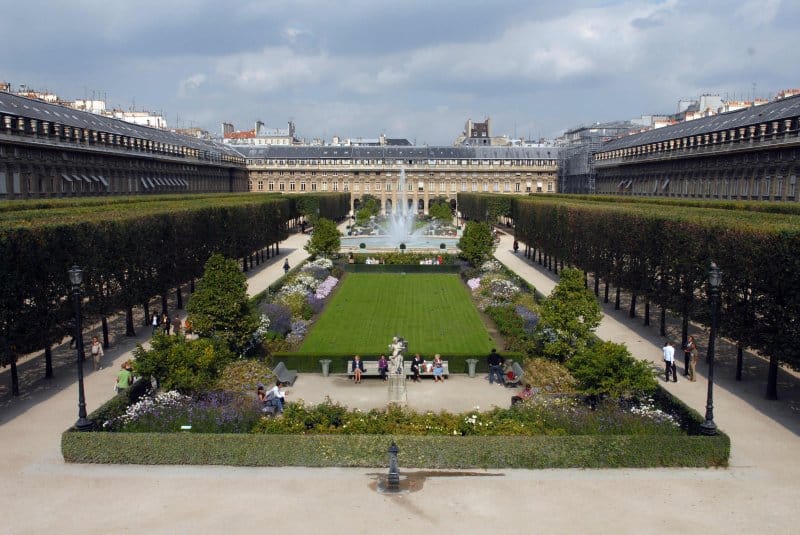 The walk starts at Concorde metro station and ends at rue des petits champs, from the beautiful Tuileries garden to the romantic 19th century covered passages around Palais-Royal. 3 km( 2 miles) and last 1,15 hour.

Enter through the Grille d’Honneur de la Concorde. Opposite, the famous Paris axis continues, starting from la Défense, and heading straight towards the Louvre pyramid. 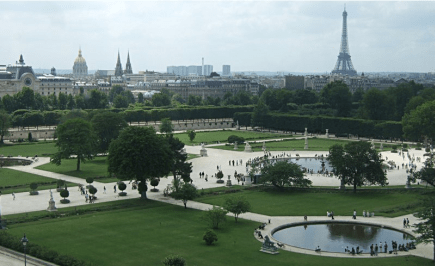 Pay homage on your left to the bust of André Le Nôtre, creator, in 1664, of the gardens which stretch out before you (25ha/ 57 acres). Heading past the octagonal ornamental lake, where ducks from the Seine like to come to rest, and the Elysée Palace, you’ll enter the ‘Grand Couvert’ planted with banana trees and horse chestnuts. ‘3000’ for the year 2000 was the slogan of the Public Establishment of the Grand Louvre.

These trees line the way to Solférino path, which is linked to the Musée d’Orsay via a pedestrian passage opened in Dec. 1999. Known as the Passerelle Solférino, this avoids needs for detours.

Note the discreet style of the cafés which have sprung up in this area. The round ornamental lake comes alive from 3pm onwards with brightly colored little sailing boats which can be hired for children.  The almost white gravelly ground is a marvelous reflector for the sun, useful to know if you want people to think you’ve spent your holiday in Seychelles, instead of Paris !

The numerous statues (around 100) from 18th and 19th Century are all copies, their precious originals now safe in the Louvre. In the garden of the Carrousel are 12 rows of trimmed yews which make a fantastic 6-ha (14-acre) maze.

To get there, go past the little moats, dug in the 19th century to steps of the terrace of the Tuileries and head towards the pyramid of the Louvre. The famous Castle of Tuileries used to stand between the two pavilions by Marsan and Flore, but it was burned down under the Commune in 1871. As you can see, the moats provided little defense.

Turn around to admire the view of the Tuileries and the English-style gardens, created by Napoléon III. There are few blue tits’ nests hidden in the tree trunks. Over 23 species of birds have been seen in the Tuileries, including a kestrel in the nearby Tour St-Jacques, who comes looking for food early in the morning.

The northern Terraces of the Feuillants and south of the Bord de l’Eau have been replanted with lime trees and mulberry trees in memory of Henry IV. The flowerbeds, planted with perennials and biennials are changed twice a year. There are 16 gardens tending almost 60.000 plants !

Read also our selection of best parks in Paris.

Get out the garden by the place du Carrousel roundabout where you can admire the view on the Glass Pyramid and the Louvre Museum entrance . Turn left to reach Palais Royal and rue de Richelieu. 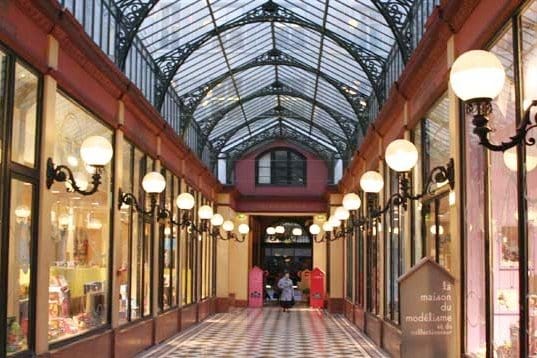 Along the way, there are some fine sights: in rue de Montpensier stands the superb Palais-Royal Theatre (especially stunning in the evening when all lit up). On the outside, there is a strange, baroque facade, with a very modern fire escape (almost a work of art), while the inside has a rich decor in deep red and rose tones.

Nearby, in rue de Beaujolais, is the restaurant of Le Grand Véfour, established in 1760. On the first floor are salons where Marat and Desmoulins, amongst others, were once received. Voltaire also would treat himself there. The decoration is sumptuous: lace curtains and brass curtain rails, glass ceilings painted with arabesques ceramics and gilded moldings.

Slip behind the restaurant to rejoin the Passage Peron, on the left; a festival of light and color will greet you from the shops selling music boxes, toys and antiques.

Coming out of rue de Beaujolais through elegant little stairways, turn right; 30m (100ft), on the left, is the Passage des Pavillons, very short and rather crooked, which soon leads you into the traffic of rue des Petits-Champs.

Read more about neighborhoods to visit in Paris.