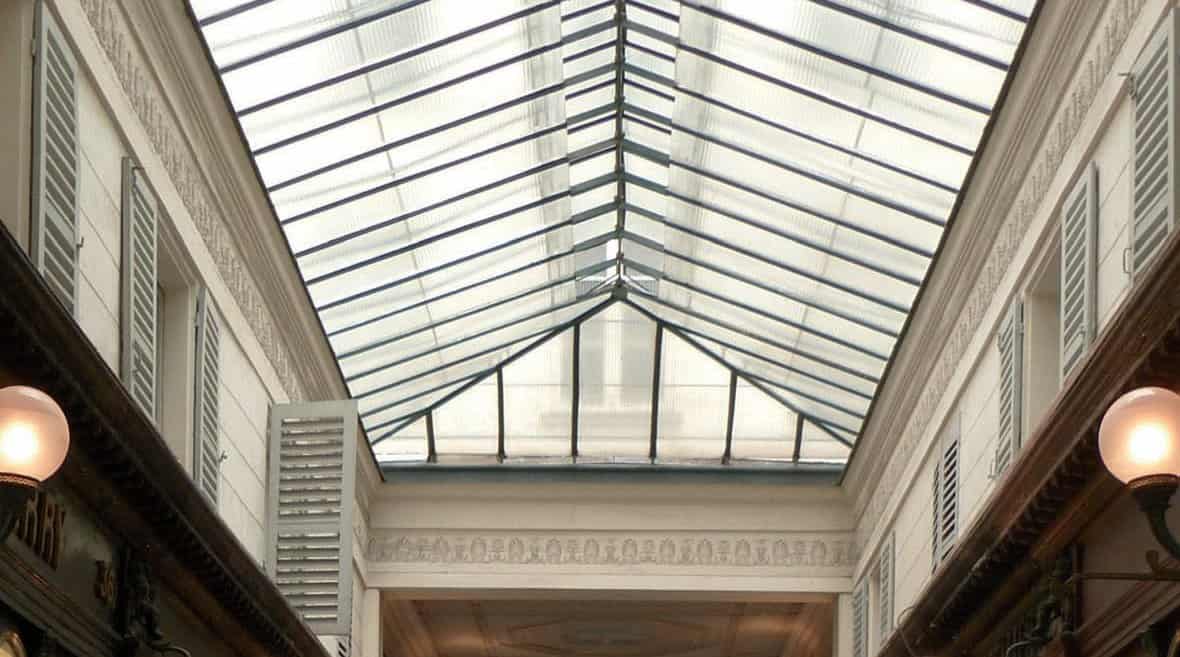 Follow the Covered Passages through the 2nd arrondissement of Paris for a walk with difference, tinged with mystery between Opera and Palais-Royal. It one of the best attractions of Grands Boulevards and Opera Neighborhoods.

Along this route you’ll relive the supposedly ‘good old days’ when Paris has neither pavements nor electricity. The passages were built on plots of land requisitioned by the Revolution, in order to protect people passing through them from the mud and the rain. These narrow arcades were  one of the first pedestrian areas, with elegant vaulted roofs made from wrought-iron ad glass.

Their popularity soon grew and the Restoration and the July Monarchy were to see the creation of around 20 of these miniature villages. This area had the first restaurants worthy of the name, cafés where people played drafts or  dominoes and saw the beginnings of theaters, balls and inns where people drank absinthe. The middle-classes, poets and thespians, factory workers and the working-classes all rubbed shoulders together.

The passages had their golden age in the 19th century. At the time, building arcade and then leasing the shops and their accommodation was the most profitable investment you could make, so it should come as no surprise that by 1840 there were more than 130 of them. Eventually shoppers began to desert the arcades for the new-fangled department stores. As the city grew, trains pushed travelers out towards the countryside, and cars passed by these arcades without  even noticing them.

These days however, traffic jams have brought pedestrians back onto the pavement, and the passages have been rejuvenated. They’re not all business premises, however, some of them are simply a means of Communication between two streets. One of the benefits of taking this route is that if it rains you’ll be under cover !

It has had a long convalescence, but it has been restored to its former old-world charm. It is worth visiting its mosaic floor with large geometric shapes, rotundas, glass roofs, tine forged-iron staircases, and its refined  tranquility.

At the end of the gallery is a beautiful clock.

A favorite passage with Parisians up until the Second Empire, Vivienne Gallery awoke from a long sleep in the 1980s with the arrival of designer shops like Jean-Paul Gauthier or Nathalie Garçon…

Upmarket business have replaced the humbler professions that used to be here.

Opposite, Passage des Petits-Fères leads to the church of Notre-Dâme-des-Victoires, which is unique because it is decorated with around 36,00 thanksgiving plaques. Its neighbor, Colbert Gallery, has had a face-lift as well. Nicely restored, it houses the Musées des Art du Spectacle, with a fine rotunda.

The way out is in rue de la Banque, where you rejoin Place des Petits-Pères. At No7, take a look at he Ionic Cornices of the Hotel Colbert; at the middle of the highest part the stone scrolls are formed by grass snakes.

The longest (190m) covered passage in Paris begins with an elegant façade at 23 rue St-Augustin ans ends at 40 rue des Petits-Champs, protected by an iron structure. The opposite of its predecessor, it’s flashy, busy and crowed.

Local Employees with no time to do their shopping on the avenue find almost all the shops they need there.

The Passage Choiseul was renovated in 2013, it was built between 1825 and 1827 and housed the famous writer Louis-Ferdinand Céline during his childhood.

The circular Panoramas gave their name to a passage which combined the atmosphere of the wooden galleries of the Palais-Royal with that of the boulevards. New alleys have expanded the original arcade. It is a scale model of a grand-boulevard – animated, colorful and sparkling with some amazing shops.

The unique engraver’s shop owned by Stern is a must-see. The shop hasn’t changed since 1840. Its windows are like little museums from old engraved maps to ‘livery buttons’. Inside there’s magnificent sculpted woodwork.

There are also a number of philatelists, from the popular discount to the upmarket, displaying its certificate of authenticity .

Continuing to the east of the 2nd arrondissement, there’s the Tour Jean-sans-Peur, at 20 rue Etienne Marcel. People used to live in this tower, which along with the Hotel Clisson (in the Marais), is the only real vestige of feudal Paris. Built in 1408, it lost the private residence to which it belonged, and since then has been adopted by a primary school.  Coming through rue Française rejoin rue Tiquetonne, with fine 18th-century houses on each side (at No10 there’s an unsual shop sign: ‘The Cork Tree’).

Read also Romantic things to do in Paris.

Heading  along rue Greneta, there’s a fountain at the corner of the street, which dates back to the 16th century. Opposite the Grand-Cerf is Passage du Bourg-l’Abbé. A round arched glass roof, an old barometer and a forlorn broken clock look at one another wearily.

It was built in 1825 on the site of the hostelry of the same name, which was used as a mail staging-post until the Revolution. The passage was reopened in 1192 after being given an end-of-century makeover which has perhaps turned out a bit too clean and academic. Certainly the glass roof is superb, but rather dreary uniformity of the shops have made it lose some of its charm.

Through rue de Palestro, as far up as no21, is Passage de la Trinité. This is the only vestige of the former Trinité Hospital, as well as the church which built there in 1817. At night it’s pretty gloomy. Exit at 164 rue St-Denis.

as far up as 178 rue St-Denis is a 12th Century lane which originally bordered the former Trinité Hospital. There are some superb 14-th century gabled houses. Return by rue de Palestro (at No27) which you can also find from the other side of rue de Réaumur. There’s a superb ceramic clock on the corner of rue de Réaumur and rue de St-Denis.

Take a look at 1900 architecture of the Monoprix shop on the corner with boulevard Sebastopol, before being swallowed up by rue de Ponceau a street where there is always something happening.

Read more about neighborhoods to visit in Paris.

Rue du Caire : the whole quarter was given Egyptian names after the Bonaparte expedition in 1798. This is where the famous Cour des Micracles was held in the 17th century. It probably owed its nae to the fact that once night had fallen ‘the blind beggars’ could see clearly…  ‘cripples’ the use of their limbs.

Place du Caire  the most beautiful entrance to Passage du Caire, this square is bordered by an Egyptian-inspired building, complete with a sphinx, a lotus, imitation-hieroglypics and three enormous heads of scribes. The square ans the quarter, lively during the day, enjoy an almost provincial calm in the evening and are totally deserted at night. in the passage, there are number of streets covered with glass roofs with shops selling clothing. This where the Sentier area starts, the realm of off-peg clothing. You leave the passage via 239 rue St Denis

A few yards along is Passage du Ponceau at No.212. Exit onto the Boulevard Sébastopol.

Best Halloween Parties in Paris in 2016

I’m really impressed with all the detail. Will be in Paris in January and all this info will help planning on what to see and do. How about some restaurant choices. Thanks! Bon Soir.

Hey, thanks for ready us.
Try the Grand Vefour restaurant near Palais Royal. An institution since 1760 !
Another famous restaurant: Druant Restaurant (nearby Passage Choiseul) where the literary prize “Le Goncourt” is awarded each year

Where can I eat in Passage des Panorama? Are restaurants in Arcades Good or are they tourist traps?

Hi !! thanks for the post, I thought I knew them all (Vivienne, Choiseul, Panoramas, Grand Cerf, …) but discovered there were many more !! Will go visit them soon !