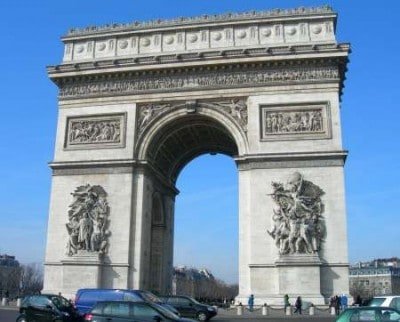 The Arc de Triomphe is one of the most famous monuments in Paris. It was built at the beginning of the 19th century to commemorate Napoleon’s army victories. It is certainly the best of view on roofs of Paris. Read our tips on how to visit the Arc de Triomphe :ticket price, opening hours and free access times.

You can jump at the rooftop of the Arc de Triomphe. It’s certainly worth a trip in Paris. You will enjoy their one the best view on Paris.

The Arc de Triomphe is open every day

Special tip: access to the rooftop at the sunset. (book in advance)

Our Review: A visit of Arc de Triomphe is not the most expensive activity in Paris, it costs only €13. But it is one one the best attraction in the French Capital. And it offers one of the best view on Paris.

The only “sane” way to get to the base of the arch is to use the underground passageway – unfortunately not connected to the nearby metro tunnels – that surfaces on the even-numbered side of the Avenue of Champs-Elysée. The similar northern passage surfaces on the Avenue de la Grande Armée.

Driving around the roundabout is Paris’ ultimate driving challenge, especially during rush hours.

>>Book your Q-jump Ticket for the Arc de Triomphe

Tips for your visit of the Arc de Triomphe

Arc de Triomphe History and what to see

The Arc de Triomphe was commissioned in 1806 by Napoleon to commemorate his imperial victories. It remained unfinished when he started to loose battles and actually lost the war. The monument was finally completed between 1832 and 1836.

French armies where not the only ones to march triumphantly through the Arc de Triomphe. There were also victorious Germans in 1871 and 1940 and the victorious Allies in 1919 and 1944.

In 1920, the body of an Unknown Soldier from WWI, taken from Verdun in Lorraine, was interred beneath the arch. His fate and the one of countless others like him are commemorated by a memorial flame rekindled every evening around 6.30 pm. France’s national remembrance service is annually held there on November 11th at 11 am.

It is central in Paris, 2,2 km north-west of Place de la Concorde in the middle of place Charles de Gaulle (or Place de l’Etoile), the world’s largest traffic roundabout and the meeting point of twelve avenues and three districts (8th, 16th, and 17th arrondissements).

The most famous of the four high-relief panels is to your right as you face the arch from the Avenue des Champs Elysées side. Entitled Départ des Volontaires and also known as La Marseillaise. It is the work of François Rude. Higher up, a frieze running around the whole monument depicts hundreds of figures.

You can see the twelve avenues from the viewing platform on top of the arch radiating toward every part of Paris. Many of them are named after Napoleonic victories and illustrious generals. You can also enjoy an amazing view of Paris.

The Avenue de la Grande Armée heads north-westward, to the recent skyscraper district of La Défense, where the Grande Arche (a hollow cube 112 meters to a side) defines the western end of the Grand Axe (The Louvre – Arc de Triomphe axis).

Read also: our selection of top monuments to visit in Paris

Best things to do in Paris with teenagers & young adults

Palace of Versailles: tips, hours, price, how to get from Paris