home > Things to do in Paris > attractions > The Pantheon Paris: hours, price and tips 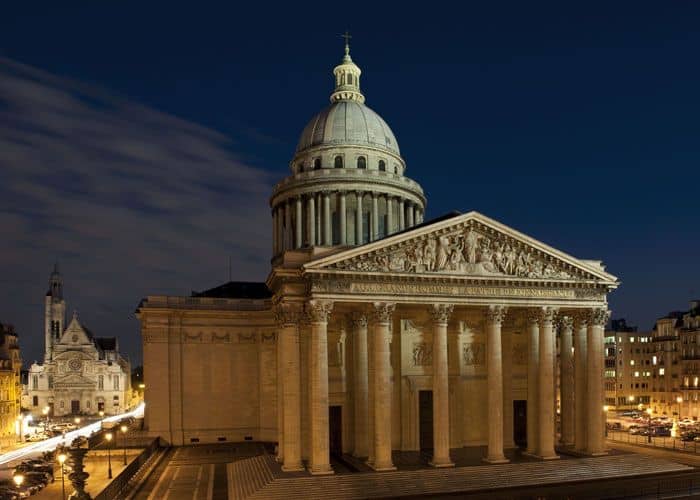 This huge and massive edifice built in a shape of a Greek cross, at the top of Sainte Geneviève hill, has a special history. Here is our guide to visit the Pantheon: prices, access, opening hours and tips.

>>Book your skip the line ticket

The Pantheon in Paris

Louis XV wished to build a church just after his recovery from an illness. He entrusted the work of Soufflot, the leading French exhibitor of Neoclassicism at this time, however, finances weren’t at their best. Therefore, he organized a lottery in order to earn enough money to erect the monument.

The building lasted many years and was finished in 1789, during the Louis XVI’s reign, just before the French Revolution.

The monument was secularized during the first Republic and became a mausoleum devoted to various great men of the time (although it served as a church for a brief moment – from 1831 to 1852). Mirabeau (the first of many illustrious occupants), Voltaire, Jean-Jacques Rousseau and Marat were buried there.

In 1885, they plumped it into a church again in order to hold the funeral of Victor Hugo, and it has remained a church ever since. Many public figures have been buried in The Panthéon such as Gambetta (statesman), Jean Jaures (politician and newspaper editor), Emile Zola, or Jean Moulin (hero of the Resistance during WWII).

The church has been restored recently.

The Crypt of the Pantheon

More than 70 great men were buried in the Crypt of the Panthéon from Voltaire to Jean Moulin, through Jean-Jacques Rousseau.

A former chapel still contains a model of the Pantheon as it was designed by the architect Rondelet, Soufflot’s successor.

From the Crypt you can enjoy a partial view of the building.

The inner architecture is heavy and pompous. A series of columns adorned with friezes supports the rounded arches.

The 83m (272ft) high central cupola will impress you, especially if you are outside of the gallery.

You will be able to admire the picturesque surrounding rooftops.

If you decide to climb higher and reach the gallery of the cupola, you will be rewarded with a wonderful panoramic view of Paris.

Museums open on Sunday in Paris