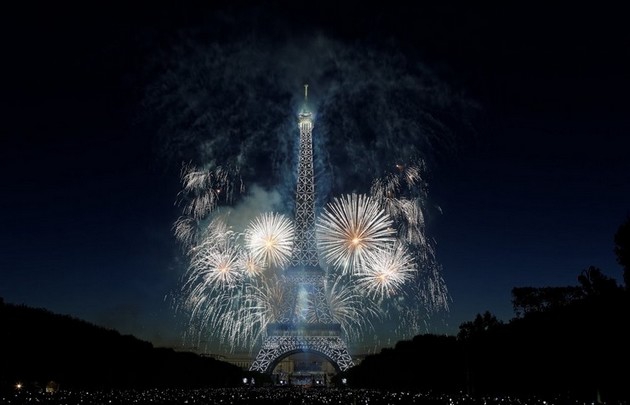 On July 14, France and Paris celebrate the Bastille Day, the French National Day. It commemorates the French Revolution and the fall of the Bastille, a medieval politic prison on July 14, 1789.

Every year, on July 14, many events are organized in the French capital: parades, fireworks, firehouse dancing…

Where to see the Bastille Day Fireworks

For, the National Day, Paris organizes famous fireworks at the Eiffel Tower. You can see it from many places like Trocadéro which is close by Eiffel Tower, or the Montmartre Hille

One of the best view on the fireworks is from the Seine river. It is the reason why having a Dinner Cruise is a must do for July 14 in Paris.

It allows you to enjoy a gourmet dinner while admiring the Bastille Day fireworks. The Bateaux Mouches cruise is the most appreciated.

>> Book your boat cruise with a wonderful view of the fireworks

You can book now your river cruise for July, 14, 2023. You can also cancel your reservation easily.

You can also try of the bridge over the Seine river: Pont de l’Alma, Pont d’Iena,

>Find other activities for the Bastille day in Paris

As every year, the military parade of July 14th will begin at 10:00 am on the Champs-Elysée avenue.

This year The Great War (WWI) is celebrated. 72 countries have participated in World War I will send people to participate in this parade.

A lot of people gather in the Champs Elysée avenue for the French National Day to see the parade.

These two events are free

Bombers dance Parties of July 13 and 14.

On July 13th and July 14th many firehouses open their door to people and welcome very big parties.

It is a traditional event that can be kitschy in many little French villages. But these dancing parties are now considered as very trendy .

The most expected is the Sévigné firehouse party, on July 13th and 14th, that gather more than 1000 clubbers with its 4 atmospheres in the middle of the Marais neighborhood.

on July 13th and 14th
The biggest firehouse and also the most appreciated party. It is better to go there early enough to be able to enter