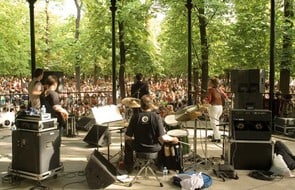 During August in Paris, temperatures can rise,  it is the month of summer activities, festivals, concerts live.  It is also the month of Paris Plages (Paris Beaches).

Read our Guide about visiting Paris in August and the complete description of the weather, special summer activities and events.

During this month many museums and monuments have extended opening hours.

The first weeks of August are the warmest of the year in Paris, after the 15th of the month, the weather is often milder and it could still be stormy.

The end of the month is generally milder and can be stormy but it still pleasant.

Generally, the average max temperature is about 24°C (75°F), as the climate is never extreme in France and min temperature are rarely under 12°C (50°F).

The average sunshine time is high during August and the average rainfall is one of the lowest of the year. The sunset is about 9m for early August, it gives you a lot of time to enjoy the visit to Paris.

August is the month when workers and students are on holiday, the City and its metro can seem empty. It makes high temperatures easier to be supported.

What to wear in Paris in August? What to pack

In Paris, the weather is undetermined, it’s difficult to know what to expect: showers or a glorious sun? So it is wise to be prepared:

– Summer and light clothes as temperatures can rise
– It’s also a good thing to have polos and T-shirts and shorts.
– For men, don’t forget a shirt to get out.
– A sweater in case of milder temperatures
– Sun protection: don’t forget solar cream, sunglasses or a hat
– Shorts can be useful if the temperature rises and it is now trendy in Paris
– skirts for women of course
– An umbrella as it can rain in August in Paris.
– Good walking shoes (but avoid running shoes in the Capital of fashion)
– Open and closed shoes for different occasions.

On August, Parisian leave the city to spend holidays abroad or in one of many French regions.

Some places can be strangely deserted, the Metro does not crow.

Most of the people you meet are tourists from France or abroad. It so the period when the visit to the City of Light can be the most peaceful.

Some restaurants and little shops can close around mid-August but it touristic places everything is still open.

During the summer in Paris, there are many concert lives during Paris Plages Enjoy one of many summer music festivals (Paris Quartier d’été, Rock-en Seine, LaPlage…).

Discover one of the typical districts of Paris like Marais, Latin Quarter or Montmartre Find a selection of fun activities to do in Paris.

Special events in Paris in August

It one of the most popular summer events in Paris, beaches are settled on the Seine bank, free concert live beaches activities are available for adults and kids (beach volley, rugby mini-catamaran), free dancing lessons of salsa, tango, foro are given, concert live and other surprising events.

One of the greatest Music festival in Paris, in the spacious and beautiful Parc de Saint-Cloud (West of Paris)

Things to do in Paris with your lover.