home > Excursions > Palace of Versailles: tips, hours, price, how to get from Paris 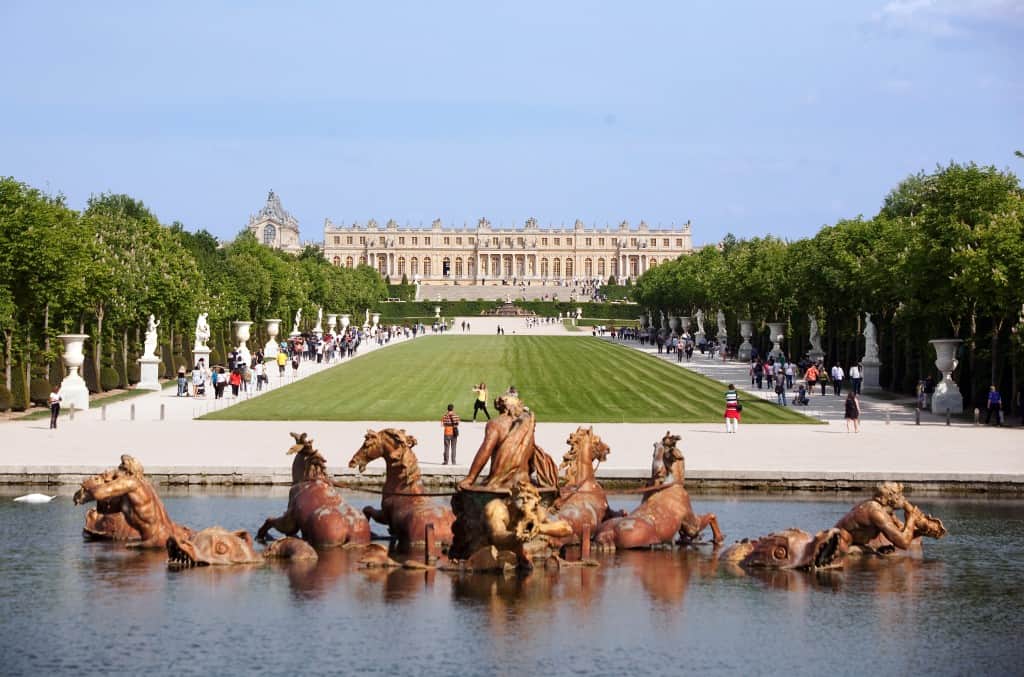 Palace of Versailles: tips, hours, price, how to get from Paris

Easily accessible from Paris, a day trip to the Château de Versailles is clearly a Must’do in Paris surroundings and a good idea for an excursion. Opening hours, tips, Day trip to the Palace of Versailles, prices and how to get there…Read our complete guide :

How to get to the Palace of Versailles from Paris

Firstly, let see all the options to get to the Palace of Versailles.

>> Buy now your ticket now and skip the line

>> Book your ticket now and skip the line

Many tours are available to visit the Palace of Versailles complex from the simple tour to the complete package with pick-up and return to your hotel.

Please find below our selection:

Low Season (November to March): open everyday except Monday from 9.00 am to 5.30 pm (closed on Monday)

History of Palace of Versailles

In 50 years, Versailles was completely transformed from the simple hunting lodge of Louis XIII to a lavish and huge palace, a monument to the age of absolutism. What you see today has been considered as the greatest living museum of a vanished life.

The construction of this symbol of pomp employed from 32,000 to 45,000 workmen, some of whom had to drain marshes – often at the cost of their lives – and move forests.

Louis XIV set out to create a palace that would be the awe of Europe. He entrusted Louis Le Vau with the architecture, although Hardouin-Mansart was to play a great role later on. Le Brun was given the mission to decorate the interior. Together these  great artists created grandeur and elegance that were to be copied but never duplicated all over Europe. Versailles became a symbol of pomp, magnificence, ceremony, and opulence.

Many Kings occupied the Château, Louis XIV (the Sun King), Louis XV and Louis XVI. Napoleon also lived at Versailles but was not really fond of it.

The Gardens of Château de Versailles

the garden facade is 575 meters long. Various annexes are dotted here and there in a park which is several kilometers in both length and breath. The park shows the skill of Le Notre in making good use of the natural resources on the site. Bronze and marble of mythological characters.

Everything in the town leaves the visitor over whelmed by the taste, as well as the power and wealth, of the man for whom it was all built. The few altercations made in the 18th century have in no way detracted from the splendor of this monument.

As the tour of the buildings has to be made with an official guide,  we concentrate on the external architecture ad the park.

The Palace of Versailles: What to see

The Cour and the entrance.

You approach the Palace through the Place d’Armes, a semi-circular courtyard enclosed by the palace railings. From here, look at the original building, the small hunting lodge built by Louis XII in 1631 when Versailles was only a marshy forest where the King came to hunt deer and boar. the buildings on either side housed the beaters.

Beyond this first courtyard is the narrower Cour des Ministres. Finally, you reach the Cour des Marbres and Louis XIII’s small lodge, easily recognizable by the alternating red and white stonework. Louis XIV lived here behind the 3 tall windows which open onto the balcony.

The rural aspect of this building has been blended with the majesty of the newer additions by the work of Le Vau, Francois d’Orbay, then by Hardouin-Mansart also added a to the old Castle. T

The six magnificent Grands Appartements are in the Louis Quatorze Style, taking their names from the allegorical celling paintings. The most famous is the Salon of Hercules, painted by Francois Le Moyne, using Pompadour red and depicting the club-carrying strongman riding in a chariot.

Beginning in 1733, the artist worked on that ceiling for three years, completing it in time for his suicide. Louis XV was delighted (by the painting, not the suicide). In one of these apartments, the Salon of Mercury, Louis XIV died in 1715 after one of the longest reigns in history, lasting 72 years.

Visitors pass through the Salon of War, wherein a bas-relief by Coysevox depicting a triumphant Sun King on horseback trampling on his enemies (or victims). Finally, they arrive at the most famous room at Versailles: the Hall of Mirrors, 236 feet long.

Begun by Mansart in 1678 in the Louis XIV style, it was decorated by Le Brun with 17 large windows matched with corresponding reflecting mirrors. On June 28, 1919, the treaty ending World War I was signed in this corridor. Ironically, The German Empire was also proclaimed there in 1871.

The town side of the building, with its many additions, does not convey the grandeur of the place. The best way to appreciate this is by going to the of the gardens by the lake when the sun is setting and tinting the windows red.

The whole aspect could be monotonous, but with dark shadows in the ground floor arcades, and the continuity of the central buildings broken by columns, as well as trophies and the roof balustrade, this danger is avoided. Behind this facade is the Galerie des Glaces (Hall of Mirrors). Two plain wings further back emphasize the majesty of the style of this frontage.

To the right through, the south flower border is the Orangerie, another of Hardouin-Mansart’s masterpieces. This was originally a , built in a beautifully simple classical style. For example, plain stones and several arches are ornamented with four pairs of columns at the entrance. The succession of high vaulted galleries has to support the building.

On each side of the courtyard are the Hundred Steps, two huge flights of stairs leading up to the building.

The park is magnificent with statues and displays of running water.

The Trianon of Versailles

During your excursion, you will have to visit the Trianon. Set apart from the palace and its crowds, the kings came here to find the peace of nature and the society of close friends.

The Grand Trianon was also built for Louis XIV by Hardouin-Mansart.

This luxurious single storey building blends its pink and green marble frontage into the surrounding woodland.

Napoleon enjoyed living here, and his influence is still felt in the furnishings.

The Petit Trianon was built for the Marquise of Pompadour in 1755. The architect, Gabriel designed the building with high narrow windows.

The miniature palace opposite the Trianons reflects the style of the mansions built by G around the Place de la Concorde. Louis XV had this exquisitely decorated for the lady Du Barry.

Nature triumphs in the twisting paths of the English garden with its river, the lake, and the Temple of Love. It was there that Marie-Antoinette came to play at being a shepherdess in a charming miniature village.

Best Things to do in Paris with young adults & teenagers

We visited the Palace of Versailles yesterday . It was amazing . Thanks for your tips : the guided tour was very interesting !