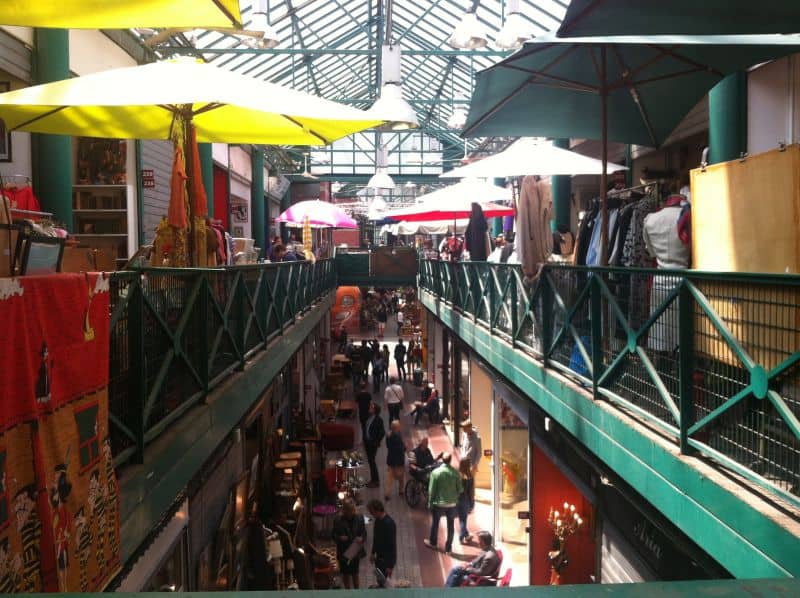 Paris’ flea markets (marchés aux puces in French), easily accessible by metro, can be great fun if you’re in the mood to browse for unexpected treasures among the brocante (second-hand goods) and bric-a-brac on display. Some new goods are also available, and a bit of bargaining is expected

This vast flea market founded in the 19th century (1885) is said to Europe’s largest flea market and one of the most visited place in Europe. It situated at the northern edge of 18th arrondissement (Mo 4 Porte de Clignancourt). The stalls – of which there are over 2000- are grouped into ten market areas each with its own specialty (antiques, cheap clothing, vintage goods, painting…). You can have more information at the Centre d’information (154 rue des rosier , Saint Ouen),the tourist office. It is open to the public on Saturday, Sunday and Monday from 8am to 7pm (later during summer.

If you arrive by metro (Line 4, Station Porte de clignancourt) , walk north along ave de la porte de clignancourt and cross under the Blvd périphérique to the inner suburb of Saint Ouen. The market is centered around rue des rosiers street and nearby Avenue Michelet, rue Paul Bert, rue Voltaire.

While shopping watch out for pickpockets.

This market, in the far south western corner of the 14th arrondissement, is known for its fine selection of junk. Georges Lafenestre avenue looks like a giant car-boot sale, with lots of items that aren’t quite old (or classy) enough to qualify as antiques. Marc Sangnier avenue is lined with stalls selling new clothes, shoes, handbags, and household items. It is open Saturday and Sunday from 8am to 1.30. On Sunday afternoon a market with clothes, thrift, and accessories is open until 6pm (7pm in summer).

The Aligre Market (Marché d’Aligre), smaller and more central than the others located at place d’Aligre – 700 meters south-est of place de la Bastille – is one of the best places in Paris to rummage through card-board boxes filled with old clothes and one-of-a-kind accessories worn decades ago by fashionable Parisians. A paradise for vintage goods.

It open Tuesday to Sunday until 1pm.

This market, established in the 19th century, is in the south-eastern corner of the 20th arrondissement between the Porte Montreuil metro station and the périphérique ring road. It is known for having good quality second-hand clothes ad designer seconds. The 500 stalls also sell engravings, jewellery and linen. It is open on Saturday, Sunday and Monday from 7am to 7pm.

Brazil, Mexico, Argentina, where to watch Worldcup in Paris

Shops on the Champs-Elysées Avenue

The Department stores in Paris: Temples of Luxury...