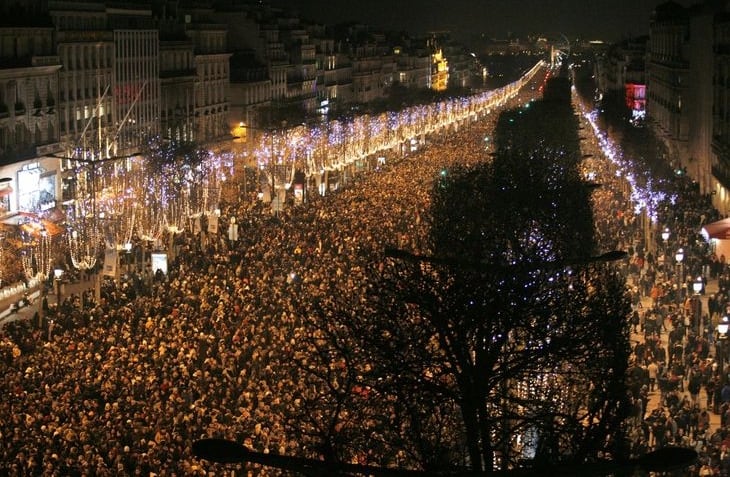 Be here at midnight in the most romantic and beautiful city in the world to kick off 2016 with a bang!

Find all the tips to enjoy a romantic, chic, gourmet or festive New Years Eve in Paris. Many famous parties are organized to celebrate this festive . 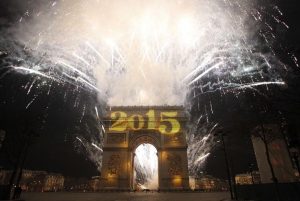 fireworks for NYE in Paris

For your Paris new years eve 2016 , you can also have a gourmet diner in a gourmet restaurant, or during an amazing Seine river cruise.

Pubs, bars and restaurants will mostly be ticketed on the night .

Make sure you plan in advance if you want to celebrate the new year  in Paris “intra-muros” (Central Paris).

-Take a fly boat river cruise in Paris  : The sight from the Seine is very beautiful . Parisian monuments (Notre Dame, Orsay Museum, Les Invalides, Eiffel Tower…) seen from this side are wonderful. You will enjoy Lights and decoration. 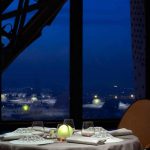 – Have a dinner in Eiffel Tower restaurant : You can enjoy a delicious dinner and a beautiful sight from the first or the second floor of the tower. (Mo Bir Hakeim)

There is 2 restaurants in the Eiffel Tower : the 58 Tour Eiffel (a chic Brasserie at floor 1). Le Jules Verne (Grande Cuisine Restaurant at floor 2) and a Champagne Bar at floor 3. A perfect place  for an unforgettable dinner 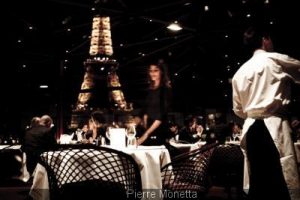 Paris is the capital of Gastronomy  so you be spoiled of choice. You can opt for a chic restaurant like , La Bauhinia, L’abeille, or Le Mandarin Oriental or you should prefer the sightseeing restaurants like Les Ombres, L’opéra Restaurant, Le Ciel de Paris.

Why not to try the famous restaurant Chez Clément which offers a wonderful view on the Champs Elysées and its fireworks , the Marina Dinner Cruise, on the Seine river (the most beautiful avenue of Paris) or Le Terminus Nord, the historic lively Parisian brasserie.

people gathered on Champs Elysées in Paris for NYE 2015

For the New Year’s Eve celebration Paris City organize a video morphing show. From 11.30 pm till 11.50 pm  a special video show will be projected on the Arc de Triomphe and then a spectacular count down will take place. More than 100000 people will gather in the most beautiful avenue in the world.

For New Year’s Eve Paris, clubbers are spoiled for choice with all special events and parties going on around the capital. Buying tickets in advance is recommended, as many events sell out and price rises.

Some Parisians and tourists celebrate the new year in one many NYE river cruise parties organized for the occasion.

Why not to celebrate the New Year on the Seine River. It’s the perfect place to enjoy the beauty of the city of light. For this special event you choose a special New Year’s eve dinner cruise and have a gastronomic meal in family or with friends . A party animated by a DJ is also organized during the Cruise.  from 31 Dec.  2015 ,9pm till 1 jan.2016 4 am . Price : from from 260€  more info

To celebrate an unforgettable NYE in Paris, try a VIP romantic cruise . You will be picked up from your hotel and brought to a fantastic cruise with a special NYE feast. The view will be wonderful, the meal gastonomic and, of course, a party will take place all night long. price: from 320€. more info

Le Duplex one of the most famous nightclub in Paris very closed to the Champs Elysée Avenue organize a special New Year’s eve Celebration with a gourmet diner and a party animated by most famous DJs of the French Capital.  Price: from 149€ – date : 31 Dec.2015  , diner from 8.30pm, party from 11pm. 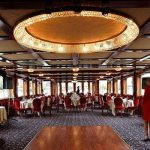 Spend your NYE in one of the most beutiful river boat of Paris ! The team of the Tennessee, an authentic paddle steamer, guests you for an unforgetable evening with a gourmet meal, champagne. You will have a panoramic view on Paris lights and Christmas decorations.  A DJ will entertain you until 2am.  Price: from 239€ – date : 31 Dec.2015  , boarding at 8.30 pmdeparture at 9pm. More info 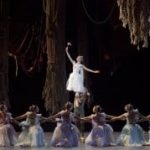 Discover the Persia of legends and tales during an amazing New years’ eve in the wonderful Palais Garnier Opera.

Have an amazing eve at Opera Bastille thanks to  the Tchaikovsky masterpiece, the  Nutcracker Ballet with a choreography by Nureyev .

Thanks for those tips about Paris. I have tickets for the new year’s eve party at Pavillon royal.
I’ll debrief you soon

Great John. I hope our tips were helpful

Is there any celebration of the new year on the champs Elysées in Paris?

Many people gather in the champs Elysée avenue for the count down of the New years eve. There many activities and about 300 000 peoples but no fireworks

What type of activities will there be?

where will be fireworks? 🙂

No public fireworks in Paris for the New year’s eve in Paris .You can find private fireworks in private parties like this one :https://www.still-in-paris.com/event/2014-royal-new-years-eve-fireworks/

Are some of these from last year? Like the “2014 Saint-Germain des Prés Year’s Eve at the Jane Club”? Any others? thank you

Every parties in this post will take place this year.
For this example the Jane Club has changed its name. It’s now Alcazar Club.
The post is being updated daily with new info concerning program and prices

I was in Paris for the New year’s Eve last year. I had a Cruise with “La Marina”. It was great ! Unforgettable !

What is a good ‘family friendly’ (13 & 11 yr old) restaurant for NYE, possible view of Eiffel Tower?

For a single female traveling to Paris, what would be the best recommendation for New Year’s Eve? I’m guessing some events or venues wouldn’t be as safe or comfortable attending solo.

Thanks for reading us, Paris is not really unsafe. Some district could be uncomfortable for single woman like pigalle or place de Clichy.
Being alone in Champs Elysées Avenue for the new year’s count-down could be not very pleasant.
All Events presented there are safe and ok for a single woman. Most of parties take place in select night-clubs

Excellent, thank you so much for your informative reply. This 30-something lady will have a lovely evening.