Best Halloween Parties in Paris in 2016

Disguises, parties,special events… Paris will celebrate Halloween during the night of 31 October to 1st November 2016

Find all the Halloween parties 2016 in Paris by neighborhood. We will update this list regularly to allow you to can make your choice.
Do not hesitate to propose either by leaving a comment 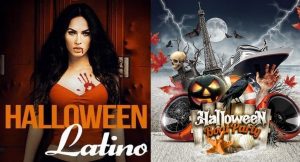 Halloween 2016 in the 8th and 9th districts – Opéra , Grand Bouledards and Champs Elysées

Halloween at Hard Rock Cafe Paris
On the occasion of Halloween, Hard Rock Café proposes entertainment for both children (Sunday October 26 and November 2) and adults on October 31 evening.
Program: Makeup, Art Contest and disguises. And for all children, a balloon sculpture and a gift by the Village JouéClub. Hard Rock Café – 14, Boulevard Montmartre 75009 Paris -12 euros (kids) / € 25 (adults)

Halloween at the Manoir de Paris
Le Manoir de Paris, the “haunted house” in Paris, organizes a Halloween events from 17 October to 9 November 2014 If the original show already gave you chills,  this new Halloween edition be more surprising

Halloween 2016 in the 18th district – Montmartre